This BLOG post was posted on Geekzone by Coach Matt.

I have been meaning to write this post for a while but the time just flies by!

For the last four years my two sons James and Tim have been competing in FIRST LEGO League (FLL). FLL is a competition for kids aged 9 to 16 years. It consists of four parts. Teams can be large or small (from 2 to 10 members)

FIRST (For Inspiration and Recognition of Science and Technology) was founded by Dean Kamen of  DEKA Research.  You may recognize his name. He invented the Segway (among other things). He is an amazing guy.

FLL is an event held annually which consists of four parts:

FLL focuses around a set of core values. The Core Values are:

As you can see these core values promote friendly competition and working as a team.

Every year the competition has a theme. The robot competition and project are based around this theme. The competition is released in August each year and competitions run through November. It is a short but intense season as a lot of work is required in a short time frame.

The Project: Each team must complete some research and identify a problem based around the theme. They then must find an “innovative solution” to that problem. The research can end up being very detailed.

The Robot: Robots are built exclusively with lego. They are based on LEGO mindstorms kits and can contain any lego elements. The robot design is entirely up to the team. The type of robot can be determined by the competition map and what type of “missions” need to be completed. The team determine what type of wheels or tracks the robot will have. Their imagination is the limit!

New teams tend to spend lots of time on the robot at the expense of the project. The robot is exciting and it is lots of fun trying to work out the best methods of completing missions. The robot is actually worth only half of the teams “score” during the competition. During match day the team is scored on Robot Design, Robot match points, Project and finally Core Values (teamwork). As the project and teamwork make up half the points the team should ensure they “gel” as a team. Quite often in a team some of the members will enjoy the project research and presentation more than the robot and this works well as all aspects of the competition are covered. The team is judged on all aspects of the competition using a set of rubrics: http://www.firstlegoleague.org/event/judging

Match day is an exciting and nerve racking time for all teams. The one limitation with Lego Mindstorms robotics is that the robot is held together with plastic pegs, battery voltage varies, the motors have limitations when “syncing” and as the robot gets further away from base the accuracy decreases. Experienced teams spend a lot of time trying to improve the accuracy of the robot. Techniques include using light sensors to detect lines, squaring the robot up on walls and ensuring that the robot is nicely balanced. Despite using these techniques robots tend to be unreliable. Even small light changes or table setup differences (which in theory should be identical) can mean the robot doesn’t detect a line or drives slightly off track and a whole mission is a “fail”.

Despite all this the atmosphere at an FLL event is amazing. The whole event oozes positivity. As the kids all embrace the FLL core values there is a sense of shared learning and teamwork (even among competing teams - yep friendly co-opertition.).

The culmination of the event is the awards ceremony. All participants receive a medal and a significant number of teams receive awards.

FIRST has a staggering reach worldwide. Some figures:

Overall Reach - All Programs Combined (projected for the 2013/14 season)

In 2013 Tim’s team (Team Antimatter) won the New Zealand Champions Award. This means the team is invited to compete in the FIRST World Festival which is held annually in St Louis, USA. The FIRST Championship is a huge event which includes over 10,000 students from over 30 countries and 2,800 Adult coaches, mentors and supporters. 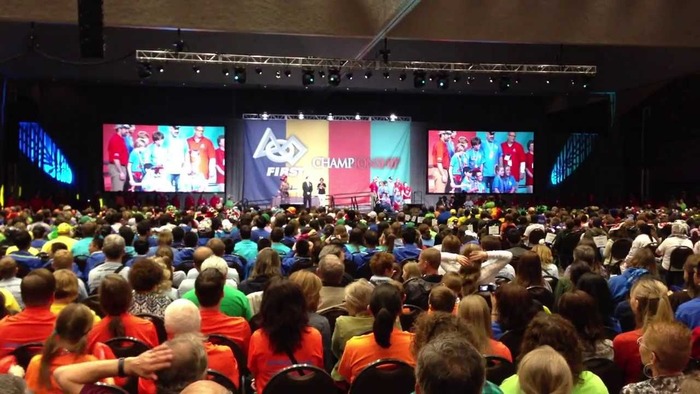 To find out more about FIRST have a squizz through http://www3.usfirst.org/. You can keep an eye out for events in New Zealand at http://www.kiwifirst.org.

Finally, the FIRST programmes are a lot of hard work and require dedication from both parents and kids however the fun learning and positive atmosphere make for some amazing rewards.

The FIRST family of events are also not just about the kids. FIRST are always looking for volunteers from a variety of walks of life. Look out for the events and get involved!

See you at a FIRST event! Matt.